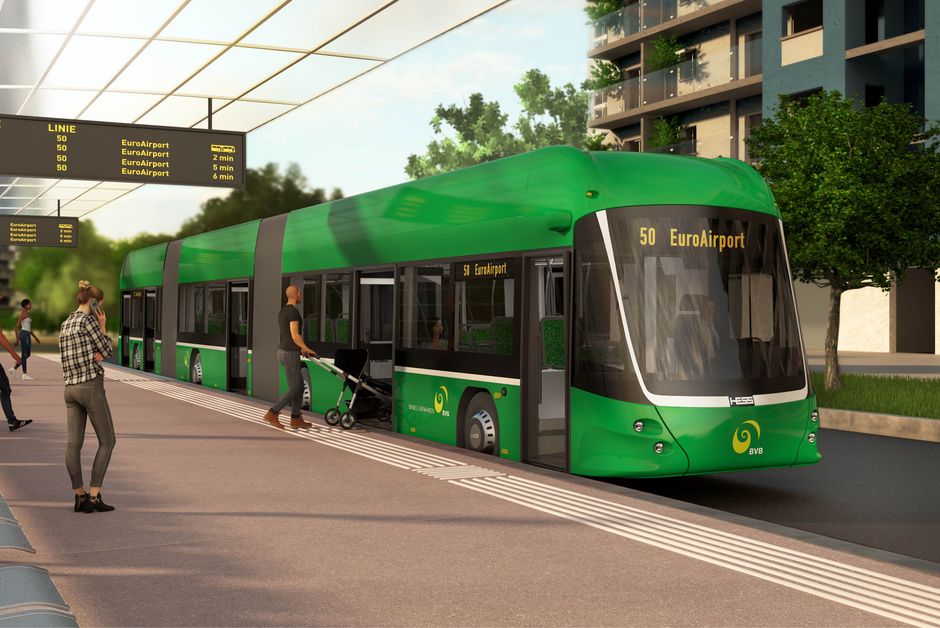 After winning contracts from Brisbane, Winterthur and Zurich, Swiss bus manufacturer HESS has also won part of the international call for tenders for electric buses for BVB (Basler Verkehrs-Betriebe).

The number 50 bus service in Basel, which runs from the main SBB station to the EuroAirport has experienced a constant increase in passenger numbers and in recent years has clearly reached the limit of its capacity. The response to the increase in demand has been to increase the frequency of services. However, further increases in service frequency are no longer possible, because otherwise there is a risk that the buses will start to hinder each other. The solution to the problem came from the HESS family of electric buses: lighTram® 25OPP. With a length of 25 metres, about six metres longer than the previous diesel buses, they provide more space for passengers and luggage as well as generous areas for pushchairs or passengers with reduced mobility. The fleet of eight vehicles ordered for the airport service can still grow later for use on other BVB routes with strong demand.

Alex Naef, CEO of Carosserie HESS AG is delighted: “We are happy and proud that HESS, along with its buses and services, have been selected and allowed to contribute to the success of the Basel bus system in 2027. With our experience and geographical proximity, we will be able to optimally support BVB over the lifetime of the buses in its further development as an attractive and sustainable public transport undertaking.”

With its attractive design, spacious standing areas by all doors and ergonomic driver’s seats, the lighTram® family of electric buses from HESS brings a new dimension to tyre-based passenger transport. Accordingly, more passengers can be carried than with conventional electric buses. Where necessary, the vehicles can be recharged at the terminal stop according to the principle of opportunity charging.

What began at HESS in 1940 with the construction of the first electrically powered buses, has today developed into a leading global company of electric buses of between 10.7 and 24.7 metres in length. Today and every day hundreds of thousands of passengers will be transported on HESS electric buses.